What is Public Art?

Public art makes a significant contribution to local identity, helps create and activate vibrant public spaces and assists to build a strong cultural and arts sector for the betterment of the community. Art can be seen as an expression of culture and can include traditional forms such as memorials, monuments, sculptures or murals or more contemporary forms such as sound installations, video or laser projections, text, aerosol art and street banners. It also includes functional objects such as fountains, street furniture, lighting and paving. It may be both permanent and/or temporary.

The Mitcham Art Advisory Group (MAAG) was established to review and provide recommendations to Council on significant or contentious public or community art proposals. MAAG terms of reference are available by clicking here. The advisory group awards public art grants up to the value of $25,000 each financial year. The projects awarded historically are listed below.

The fifth Round of Public Art Grants will available in 2021/22. Delivery of those projects will be due by 30 June 2022. If you would like any more information or would like to be added to our distribution list, please contact Rebecca Olthoff on 8372 8128 or mitchamarts@mitchamcouncil.sa.gov.au.

'Together' by Elizabeth Close

Large scale aboriginal inspired mural of approximately 19.5m. The artwork has key dimensions and themes including community. The circular motifs represent different families and sectors of the community, the palette references the landscape, and the dots represent Aboriginal connection to country stories and culture.  A time-lapse video capturing the evolution of the mural was produced by Blackwood videographers Jacob Hodgman and David Smith as part of the project.

LOCATION: TO BE INSTALLED AT WAITE STREET RESERVE, BLACKWOOD

A series of five totem poles inspired by the River Red Gums within local reserves to reflect Indigenous culture.  These totem poles are not Kaurna Artwork; however the poles will include information about flora, fauna or other aspects that were of importance to the Kaurna People (depending on location) and will be located on Waite Street Reserve in Blackwood.

Formally known as ‘Cultural Spaces’ this work titled 'Spiritual Grounding' is a work by Marra Dreaming, a group of South Australian Aboriginal artists based at Salisbury who have created works for schools and public spaces for the past decade. Lead artist Raylene Snow said the poles represent trees for making tools and shelter, animals for hunting and totems and symbols to convey stories and messages for the next generations.

“Another pole represents water, the lifeblood of our land, and Rainbow Serpent, a powerful symbol in Aboriginal culture; the creator god whose story has been passed down from generation to generation.”

The poles are inspired by River Red Gums within local reserves to reflect Indigenous culture.

The trio of Marra Dreaming artists who worked on the project, Samantha Egan, Thomas and Raylene Snow, are descendants of the Stolen Generation originally from the Northern Territory.

Each of the 5 poles represent a different theme that is/was important to everyday life to Indigenous people : 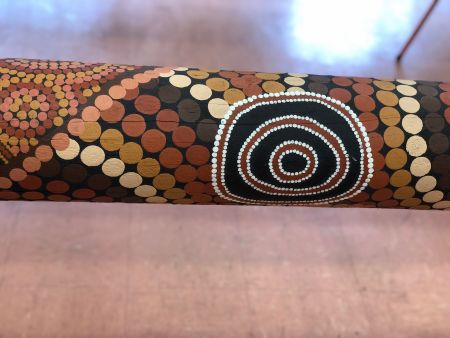 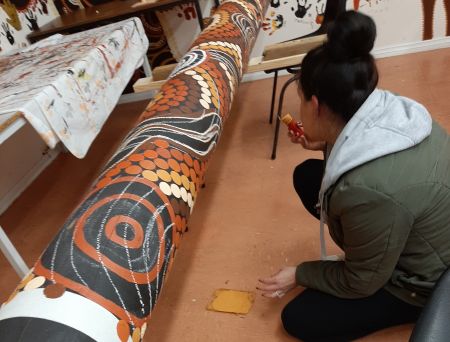 A placemaking pilot project where neighbourhood stories are presented into concrete curbing.  It involves writing short stories / poems into the face of the kerb when the concrete is poured.  Historically people have opportunistically left their mark in the wet concrete. Street stories looks to utilize this simple form as public art to create a greater sense of place for a local neighbourhood.  The pilot includes selecting a street scheduling for upcoming kerbing work, canvassing neighbourhood interest, community engagement, development of story, community review and installation.

Gladys Street residents have embraced the opportunity to share stories from their street as part of a unique community art project.

'Street stories' is the brainchild of artist and Mitcham hills resident John Denlay, who was awarded a City of Mitcham Public Arts Grant as part of the 2019/2020 Grant Round to etch stories into new kerbing.

As part of the project, John met residents to find out more about the street and its history as a working orchard.

Six stories were condensed into snippets to be drawn into wet concrete during road renewal works. One story tells of a resident who used to collect fruit and vegetables from her neighbours to make jam and preserves.

More than 60 litres and 120 spray cans of colourful paint is now decorating SA Water’s historic Torrens Park Pump Station as part of our Public Art Grant. Situated next to the Torrens Park Railway Station on Belair Road, the station’s three public-facing walls have been given new life by influential South Australian and local resident of Mitcham artist Joel Van Moore. Joel has travelled the world painting public artworks for more than two decades and is the current Artistic Director of the Wonderwalls Festival in Port Adelaide was overwhelmed by the positive feedback her received from the community.

Joel Van Moore aka Vans the Omega spent two weeks painting the three sided mural on the corner of Blythewood and Belair Roads on the SA Water owned Torrens Park Pump Station. The artwork design across the three public-facing walls incorporates unique elements common to the local community including images of the nearby Brownhill Creek Catchment, the native Purple Crowned Lorikeet and parts of the pumping infrastructure from inside the station itself. The mural also features a young girl, Violet, on the northern façade as a representation of the bright future of the Mitcham area. Also featuring on the mural is Metropolitan Facilities Manager Richard Mayger, who has been a dedicated member of the SA water industry for more than 45 years. 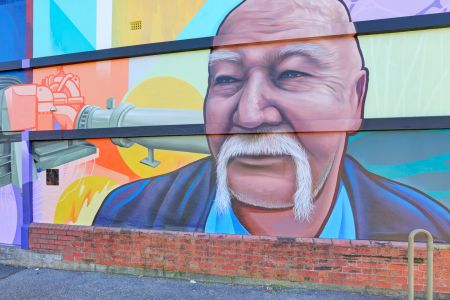 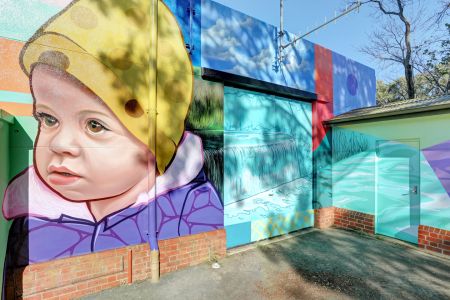 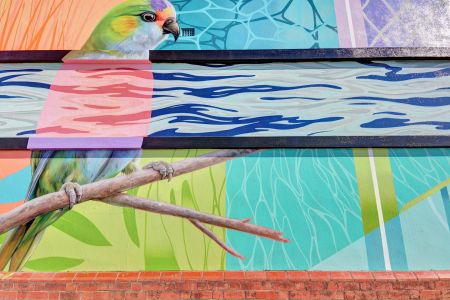 Pipe Dreams, was installed on the shed at the City of Mitcham Civic Centre located at 131 Belair Road, Torrens Park. Pipe Dreams, created by Project2Project is a vinyl of oversized pipework that is meant to evoke a sense of wonder. It eludes to the workings of our systems, our utilities and the infrastructure we rely on provided by our governments; workings too often assumed and underappreciated while providing transparency to the building. The artwork has been designed to incorporate historical and educational elements from Mitcham incorporated into it that are available through an activity sheet that you can collect from the Civic Centre or download a copy here. 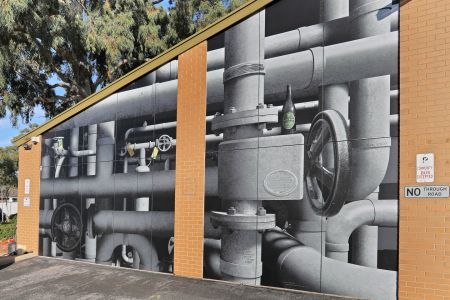 @elizabethclosearts and jakeholmesart.com completed an indigenous inspired mural on the Hawthorn Community Centre in December 2018. The water from Brownhill Creek and the natural surrounds were used as inspiration for the art piece. Hawthorn Community Centre provides the most suitable location for a mural as it nestles Brownhill Creek which has extensive cultural heritage; is surrounded by the redeveloped Soldiers Memorial Precinct and will be in view of the upgraded Mitcham Memorial Library. This mural artwork does not replace any official Kaurna art that is being determined as part of the precinct upgrades.

"This project was so organic in that Jake and I designed as we moved around the building, responding to the environment and the walls. The result, we think, lifts the entire space, and we have had so many comments from city of Mitcham residents as they’ve walked past." Elizabeth Close, Aboriginal Artist. 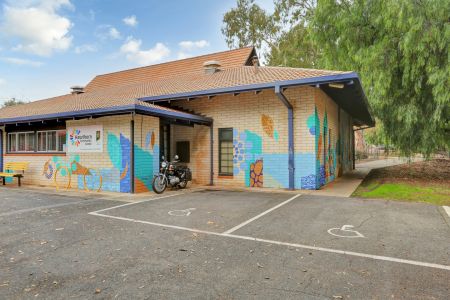 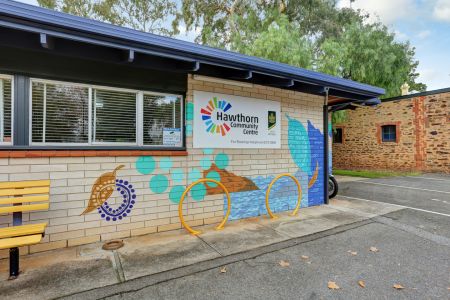 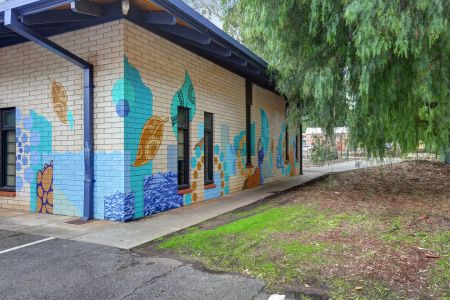 A fence art installation reflecting on the changing face of the Mitcham hills across a single year and on the special place that natural play settings have for younger people and their families. The winter season was erected in July 2018.

This piece of art engaged people and places of the City of Mitcham. The mobile machine with solar powered movements invited people to come up and talk to the artists while working, and make drawings. Jimmy collected Soul Data within the City of Mitcham during February and March 2019.

This project combines machines and their role in a visual arts practice with physical and cultural explorations of suburbia. James developed a couple of new machines, or drawing devices, these machines are curious objects that appear to have perhaps tumbled out of garden shed, they are used to create drawings that might be indicative or inherently connected to the public space in which they are created and that the act of using these machines is a point that is mildly performative and one at which audiences are encouraged to approach and engage with the artist.

"I have also been curious about increasing cravings for ‘data’ within local government and broader authorities. This is creeping relentlessly towards the arts – a sector that can be difficult to negotiate numerically.  So – I’m going to try and ‘count things’ as a driving pursuit within this project.  I would like to try and count the things that are tricky to count.  This will be a broad
experiment, resulting in many conversations as outcomes and, hopefully, finding
a way into drawings as outcomes".

Check out my project on Instagram - Local Soul Data https://www.instagram.com/explore/tags/local_soul_data/