The Mitcham Council area is renowned for some of the last large remnant areas of Eucalyptus microcarpa (Grey Box Woodland). This plant association once covered vast areas of the Adelaide plains and the foothills. Present estimates indicate that there is less than 4% of this woodland plant association that has been retained in a natural state. In 1992 the Grey Box Woodland was rated as a priority 4 for conservation purposes.

There are many threats to the Grey Box Woodland plant associations including ever spreading housing development and the clearing of land for agriculture. The other not so obvious threat is that of weed invasion.

Many plants, even natives from elsewhere in the country, can become garden escapees and cause problems in our local bushland.

To help you make your garden 'bushland friendly', Council has prepared a Hills Planting Guide and a Plains Planting Guide, which list species indigenous to the local area. Use of these plants within a landscape will be in line with biodiversity guidelines. All plants listed are commercially available.

Landholders are legally obliged to control certain plant species on their property. These are known as 'declared plants'. Declared Plants in South Australia are regulated under the Natural Resources Management Act 2004 (NRM Act).

Plants that Pose a Risk to Native Bushland

Home gardens are filled with a wide range plants that give colour, shade, screening and food but did you know they may also become ‘weedy’ in our native bushland areas.

Some plants, which escape from our gardens, can squeeze out local native plants and even reduce habitat for native animals. Some weeds increase fuel loads adding to the bushfire risk to homes.

Below are some plants used in gardens that are known to become ‘weedy’. These are declared plants under the Natural Resources Management Act 2004. The Act regulates the transport, sale, notification to landowners and control of these plants.

It is important to remember that if you have any of these plants on your property to take steps to control them and avoid moving them to other areas.

For information on how to control these plants please contact Council on 8372 8888 or visit the Natural Resources Adelaide and Mt Lofty Ranges website regarding pest plants. 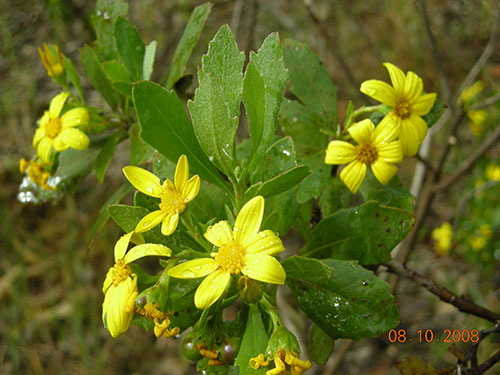 This woody shrub invades bushland and displaces native plants. It has broad bright green, waxy leaves with some white down, yellow daisy flower heads and green-black round berries. This plant invades bushland and creates a fire hazard. The shrub is an erect, evergreen, woody legume. Its leaves have three downy leaflets, with yellow pea flowers in clusters and short hairy pods with hard, round seeds. 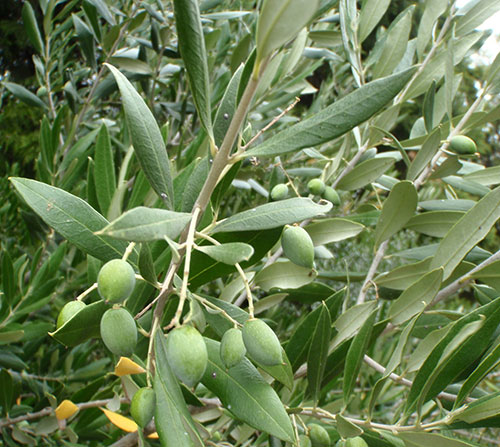 This erect, bushy, evergreen tree invades bushland and is a fire hazard. Its leaves are glossy and dark green on top and silvery below. Immature fruit turns from green to dark purple when ripe. Pollen can affect hay fever sufferers.

This shrub invades forest and coastal vegetation. It has glossy dark-green ovate leaves with berries (on female plants) which are red at first, ripening to black. 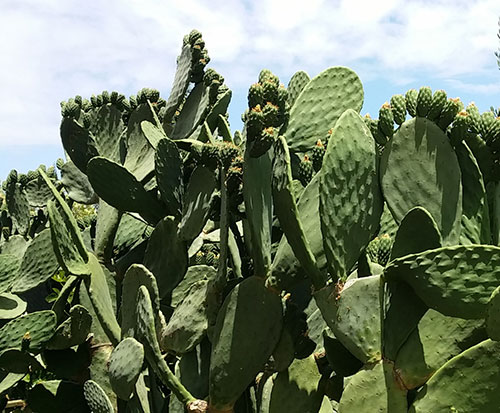 This succulent has prickly thickets and competes with native vegetation. It is easily recognised by its spiny perennials with flattened stem segments and has large flowers with numerous red to yellow petals with red fleshy fruits. The spineless Opuntia ficus indica is not a declared plant. 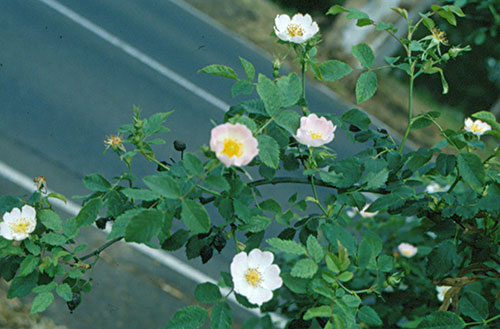 This large deciduous shrub forms prickly thickets which compete with pasture. The shrub is erect or scrambling with prickly stems and leaves and has pale pink scented flowers with red fruits (hips) with glandular hairs on the stalks. This perennial tussock grass invades pastures and bushland. It has grey-green leaves with long flower spikes and dull purple bristles. 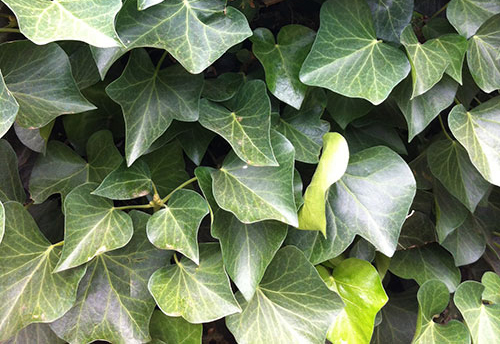 While Ivy (Hedera sp) is a lush looking, drought resistant groundcover, it also poses a serious threat as a weed.

Ivy spreads rapidly by seed and by layering where stems extend across the ground and strike new roots to form new plants causing problems in bushland reserves and suburban streets. It can climb up rock faces, brick walls, trees and Stobie poles smothering native plants and degrading wildlife habitats.

Ivy growing in trees can cause problems as tree growth can be stunted by shading as ivy grows through the canopy, while its thick, woody stems can constrict sap flow when the stems get tighter as the tree grows. It also covers cracks or splits in branches or trunks making it difficult to see and so possibly putting people at risk.

Ivy growing up Stobie poles will reach and grow along the powerlines if not pruned, possibly putting contractors at risk.

Ivy is a hardy plant and it does have its uses, but if planted inappropriately it can cause problems. Think carefully before you plant ivy or if you have ivy growing on your property please ensure it is managed so that it doesn’t create problems.

The City of Mitcham has produced a list of invasive plants that we ask you to consider removing from your garden area, helping to ensure that they do not spread into woodland area. For advice on removing weeds from your garden view our document on Removing Weeds.

Pests that Pose a Risk to Vegetation

The elm leaf beetle causes cosmetic damage to elm trees when grubs feed on the leaves, with some leaves having a ‘shot-hole’ appearance and others being almost completely eaten. While the beetles put Elm trees under stress they usually recover when new leaves grow in the spring. For further information click here.